The Cape countryside is a patchwork quilt of rolling fields dotted with cows, sheep, blue cranes, and the occasional ostrich. Amongst the cultivation remain untouched stands of the Cape’s indigenous flora or taller tree imports from Australia. Winding through this tranquil, timeless scenery en route to Arniston, I mused that John Constable himself couldn’t paint a more bucolic landscape. And it’s in landscapes such as these, framed by the stoic, craggy mountains of the Cape peninsula and escarpment that the Cape Country Routes’ constellation of properties is located.

The Cape Country Routes is a loose coalition of hotels and activity-based experiences sprinkled across the southwestern Cape (in concentration) but that extends as far up the east coast as Port Elizabeth, and as far north as Hanover, the halfway stop between Cape Town and Johannesburg. Our destination, however, was the Arniston Spa Hotel, a large luxury four-star hotel right on the beachfront in the quaint 120-year-old fishing village of Arniston, and whose bright façade gazes into the East over the Atlantic Ocean.

We arrived fairly early in the day and as the Arniston Spa Hotel and its spectacular coastal surrounds came into view, we all pressed our faces eagerly against the car windows. Eyes aglitter, we could scarcely believe that this would be our address for the next 24 hours. The Arniston Spa Hotel offers pretty much everything one would need/want to enjoy a long, leisurely stay on the southern coast.

There is ample accommodation with four exclusive room options to choose from, all of which are kitted-out with luxury furnishings, satellite TVs, minibars, coffee and tea-making facilities, and complimentary Wi-Fi. There is also a full-service restaurant (more on that later), bar, Ginkgo Spa, and picturesque pool in a central courtyard so that even the rooms that don’t face the ocean afford guests desirable views.

With her aspect towards the east, I hoped for a sea-facing room, imaging just how beautiful it would be to watch the sun rise over the Atlantic. But before we could settle in, we had somewhere urgent to be and so we deposited our luggage and made a 180-degree turnaround. The tide was rising.

Surveying this tranquil, cheery little fishing village today, it’s hard to imagine that Arniston was named after one of the worst naval disasters in South African history but indeed it was. In 1815, the British East Indiaman Arniston was bound for England. Aboard her were 378 passengers, many of whom were wounded soldiers. Tragically, a furious Cape storm – and perhaps a bit of a boo-boo on the part of the captain who miscalculated her longitude – smashed her onto the shore and only six lived to tell the tale.

If that story is a little macabre for you, there’s always Arniston’s other official name of Waenhuiskrans, which literally translates to “wagon house cliff” or “wagon shelter cliff”. This name is derived from an immense nearby tidal cave that was said to be big enough to accommodate an entire ox wagon team, the popular mode of transport several hundred years ago. And this was exactly where we needed to be before the rising tide rendered the sea cave inaccessible to us. 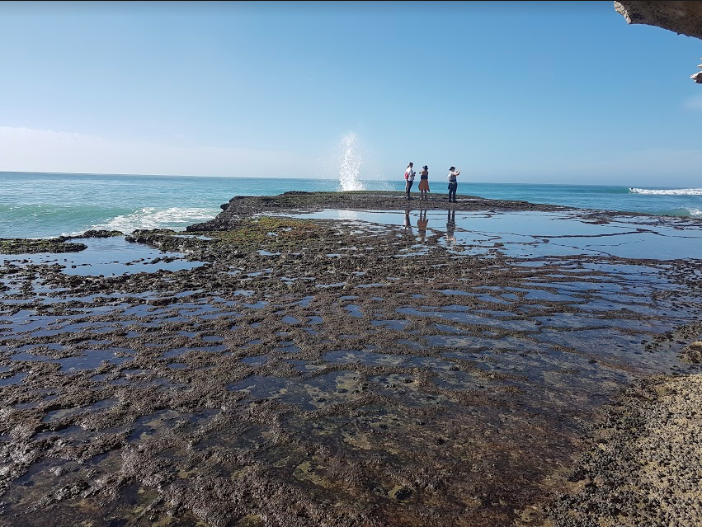 After a brisk walk alongside craggy ocean cliffs, past odoriferous colonies of cormorants, pristine coastal scrub, and dune systems that beckoned to our inner children, we finally arrived at the village’s namesake attraction. Waenhuiskrans cave was large, cool, and dank with its recent tidal bathing and was surrounded by rock pools riddled with brightly coloured sea life like anemones, sea urchins, and skittish fish. We took our photos, delighted in the sea spray and the reflections of the cave off its subterranean pools, and then, a whole morning’s walking under our belt, headed back to the Arniston Spa Hotel to check in, relieve our feet of their sodden shoes and socks, and finally appraise the views from our rooms.

We were all lucky and secured sea-facing views. The suites were filled with natural light and spectacular views of the ocean and embracing coastline. I did a quick appraisal, which culminated in some seriously smug satisfaction, and then headed down to the restaurant, where I enjoyed a lunch of chicken and prawn Thai curry with a glass of Arniston Bay Sauvignon Blanc / Sémillon. That afternoon was taken at leisure with the exception of an hour-long massage at the Gingko Spa, from which I emerged pickled with pleasure. Mystified by how my fellow media people manage to use their afternoons productively for work, I sprawled out on my king-sized bed and snoozed.

We concluded a perfectly hedonistic day with a slap-up dinner of fresh wild oysters harvested from the bay at Arniston and washed down with a glass of the delicate and elegantly perfumed Theuniskraal Riesling 2017, followed by a melt-off-the-bone lamb shank, which I savoured with a glass (or two) of the exceptional Strandveld (Rhône style) Syrah 2016. Unable to choose, we ordered three desserts to share: the baked cheesecake with sour cherry compote, iced nougat parfait with toasted almonds and maraschino cherries, and good old-fashioned pavlova with green peppercorn mascarpone cream and fresh fruit. Judging from the alacrity with which those desserts disappeared down our gullets, it’s safe to say that we all enjoyed them immensely.

That night, I was lulled to sleep by a belly full of home-style cooking, the region’s beautiful cool climate wines, and the gentle sigh of the waves on the coast.

As tempting as it was to remain swathed in sheets, I extricated myself from bed to go on a fresh, early morning walk through Kassiesbaai heritage fishing village, which sprawls right next door to the Arniston Spa Hotel. This is how Arniston began really: as a fishing community and it’s wonderful to see that the rustic, lime-washed, and thatched homes with their colourful doors and window frames remain standing, unspoiled, and inhabited by friendly fisher folk. We meandered through the 120-year-old village, enjoying the company of free-ranging dogs and the views of the sun making its escape from the eastern horizon.

Our final indulgence for the trip was a full-out assault on the most epic continental style breakfast buffet you could ever imagine. Quite literally, no breakfast item was left unrepresented, from fruit salad, yoghurts, cereals, and muesli to croissants, scones, flapjacks, cheeses, charcuterie, and smoked salmon. There was even a hot station where you could order your heart’s desire for an on-the-spot breakfast of eggs, bacon, sausage, mushrooms, tomato, and any and every combination and iteration thereof. I ate like food was going out of fashion and it was good.

What began as a colourful fishing community has since soared in reputation and popularity for its incredible natural beauty, whale watching opportunities (June to November), and human heritage and history. Chief amongst the draw cards to this rather remote neck of the Cape is the Arniston Spa Hotel, which offers travellers a quintessential Cape country experience and a luxurious and comfortable base from which to explore the region’s charming, breath-taking surrounds. And if you are yet to visit Arniston, you now know where your next weekend getaway should be.

The Arniston Spa Hotel is located at 1 Main Rd, Arniston, an approximate 210 km drive from Cape Town. For bookings and enquiries, please email info@arnistonhotel.com or call +27 (0) 28 445 9000

This article was originally written for Southern Vines Magazine, the largest lifestyle and leisure publication in the Western Cape of South Africa: https://www.southernvines.co.za/2019/05/24/the-arniston-spa-hotel-and-cape-country-routes/