Okay, so it’s like the author of this has actually been watching me watch Big Bang Theory…

Some things on our planet are so ridiculous, they could very well be the brainchildren of biblical authors. Frogs falling from the sky, crop circles, giant swirling hurricanes, belching volcanoes, sulphur-based life forms and Paris Hilton’s immense wealth (and equally as immense lack of IQ). And then there’s hail. The fact that the updrafts within a thunderstorm can be strong enough to hold grapefruit-sized hail in suspension is nothing but ridiculous and wholly impressive.

How Hail is Made

Hail consists of balls of ice shockingly called “hailstones”. You may even say that hail is frozen rain, but it deserves a slightly more complex explanation than that…

Hail is made within powerful thunderstorms or cold fronts. Cold fronts tend to produce smaller hail that might inconvenience your dog’s plans to go do his business outside, thereby inconveniencing your plans to keep your house hygienic. The large hail responsible for denting cars, destroying crops and severely upsetting your herd of cows is typically associated with large thunderstorm systems that are well-endowed in the vertical and are sustained by powerful updrafts. These traits are especially exhibited by the “Big Daddy” of all small-scale tempests: supercell thunderstorms. These you will find skipping across “Tornado Alley” during the northern hemisphere’s summer months.

Supercell thunderstorm with rotating mesocyclone (*swoon!*). The presence of such large frozen water particles within the cloud selectively reflects light towards the lower energy (green) end of the color spectrum, which is why thunderstorms that produce large hail can make the sky appear a ghostly green.

What cold fronts and thunderstorms have in common is that they are both low pressure systems that suck in air and expel it out their rear. Thunderstorms pull in great volumes of warm and moist air, which rise, cool and condense to form towering cloudy behemoths of cumulonimbus clouds. The air, once cooled, loses its momentum and proceeds to sink towards the ground. Together, these two channels of air comprise the updraft and downdraft zones that sustain a thunderstorm: its lungs if you’ll indulge a bit of poetic licence.

Now, as you should know, temperature decreases with height in the atmosphere. That’s why the tops of high mountains are frozen and it’s why you should always, ALWAYS go for a pee before sky diving. At a certain altitude within a thunderstorm, which can soar to as high as the interface between the troposphere and stratosphere at approximately 10km above sea level, the temperature reaches zero degrees Celsius – the temperature at which water freezes. Above this 0°C isotherm (an obnoxious way of saying “line of equal temperature”) all the water droplets in suspension are frozen.

The strong updrafts within a thunderstorm sweep water droplets above the 0°C isotherm where they freeze (consult the pretty diagram below). These pellets of ice then fall back down towards Earth in the downdraft zone, plummeting below the 0°C isotherm and defrosting into big globs of water. This is why thunderstorm rain gets you soaking wet faster than Channing Tatum’s dirty dancing in “Dirty Mike”.

However, some of these falling frozen pellets of rain get caught up in the updraft zone again and are swept back up above the 0°C isotherm. Only, they’ve gained a layer of water, which they collected as condensation while chilling out below the 0°C isotherm. This additional layer of moisture freezes, forming a new layer of ice over the original ice pellet.

Concentric layers of ice in a hailstone.

This process can repeat itself several times and each time, the hailstone will grow larger and larger and larger as it collects more and more layers of ice. The next time you’re in the middle of a raging supercell storm, run outside, collect a couple of decent-sized hailstones, run back to the tornado shelter, bolt the trapdoor, watch your dad arm wrestle said trapdoor with an F5 tornado, watch your dad lose, resolve to become a hardcore white vest-wearing, tornado chasing sexpot with a serious death wish. Oh! And remember those hailstones you collected? Cut them open to see those concentric circles of icy awesomeness.

When a hailstone finally gets too heavy for the thunderstorm’s updrafts to hold in suspension depends entirely on the strength of those updrafts. The stronger they are, the heavier the hailstones. This is why larger hailstones are associated with powerful thunderstorms, such as the Midwest super cells that are sustained by incredibly strong updraft zones.

And when hailstones get heavy, it’s time to run for cover.

Some thunderstorms can create hailstones that are big enough to cave your head in. Even if you do have brains. The next time you’re at a party, scoop an ice cube out your rum and coke and toss it at your mate (preferably the one who’s hitting on your girlfriend). Listen to the dulcet sounds of squealing as it clobbers him in the noggin. Now imagine something easily ten times the size of that ice cube falling thousands of metres (or feet) from the heavens. Yup! Ouch.

On 23rd June 2010, the largest hailstone in recorded American meteorological history fell in Vivian, South Dakota (image above). This great ball of ice weighed in at 0.88 kg (1.93 lbs) and was a staggering (if it had hit you in the head) 20 cm (8 inches) in diameter.

Hailstones are physical evidence of the incredible air circulations going on inside a thunderstorm. Can you imagine how strong air must be to prevent something that weighs almost a kilogram from succumbing to gravity? I don’t know about you, but that blows my mind in the most delicious way. And so we see that thunderstorms are about so much more than just thunder and lightning and the occasional airborne cow.

Next blog drops on Wednesday. Until then, happy weekend! Hopefully you find out the hard way how true the following is…

Sometimes the hard way IS the sexy way 😉

Here – Your Revised Horoscope – you will find an absolutely hilarious – surprise! – revision of your horoscope as per Wednesday’s blog on Astrology.

It took me all of two minutes to read and I am still laughing.

Also, since we’ve been talking about gravity… 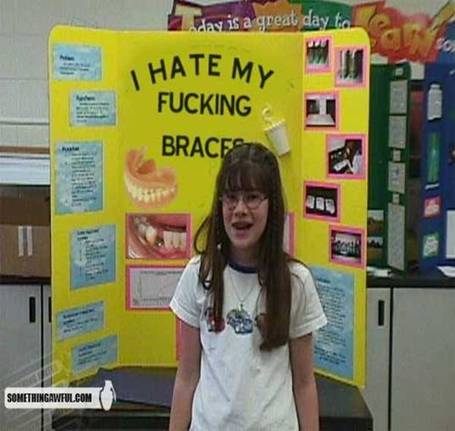 This had me in utter hysterics with laughter. If this little girl was my student, she’d get full marks for having the balls to express the incredible agony (both physical and social)that orthodontic braces cause. We’ll ignore the fact that braces are also responsible for sexy smiles everywhere

But what we can’t ignore is that this picture has most definitely been photo-shopped. For this reason – and because the most sciencey thing about this picture is the girl herself *coughNERDcough*, here’s the REAL sciencey LOL of the week… 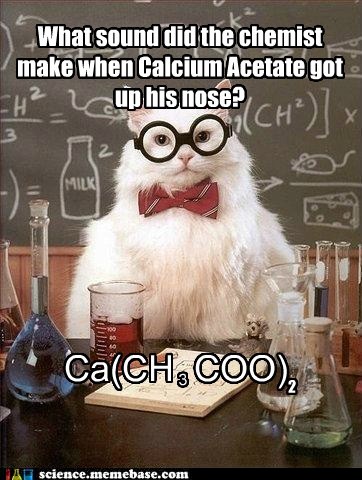 The humor lies in the accuracy…