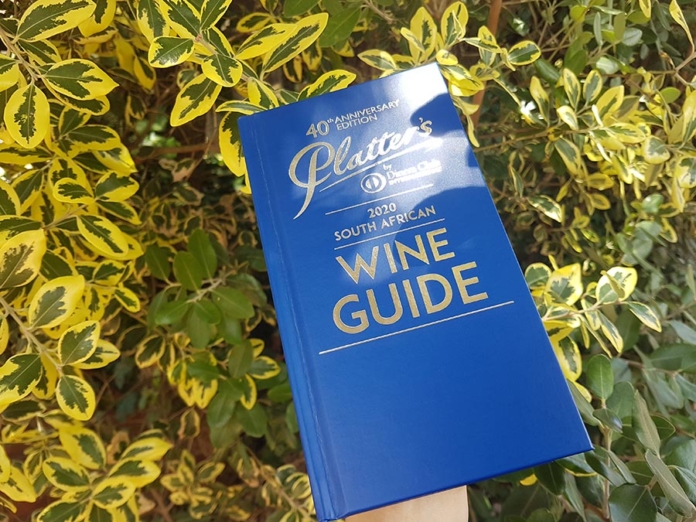 In 1980, a book went to print containing detailed insights into each and every one of the wines produced in South Africa. More than merely mentioning this 1,200-bottle-strong assembly of wines, the book detailed specifics on their estate and region of provenance, the growers, winemakers, and families behind their names, and other considerations like terroir, price, history, vintages, and more. Each wine was also awarded a rating out of five stars with the goal of giving the “wine confused” a rather fool-proof and comprehensive guide to buying wine in South Africa. I’m speaking, of course, of the Platter’s Wine Guide, conceived in 1978 and officially birthed by printing press in 1980.

This year, as with every year (but with the added importance of it being the 40th anniversary) Diners Club South Africa and Platter’s Wine Guide threw an award ceremony at the Table Bay Hotel in the V&A Waterfront to announce the South African wines, winemakers, and wine estates that have been rated the best of the best. To be invited to such a celebration is, therefore, not only an immense honour but also an unmissable opportunity to steep my liver in the country’s and, quite honestly, some of the world’s very best wines.

From “boring” to bible for the oenophile

The Platter’s Guide was lovingly put together by wine lovers and print journalists John and Erica Platter, who had been inspired by the ground-breaking ‘Pocket Wine Book’ by Hugh Johnson. At the time, one of the print staff rather brutally dismissed this considerable compendium as “boring”. I bet they feel like a real cretin now because 40 years on, this formidable tome of wine knowledge has become a bible for the oenophile and a GPS for those navigating the overwhelming waters of the SA wine industry.

And overwhelmed was precisely how I felt whilst swimming in a sea of the who’s who of the South African wine industry at the Table Bay Hotel. A glass or two of Graham Beck bubbly later, we all filed into the hotel’s luscious Ball Room for the awards ceremony and the presentation of the 2020 Platter’s Guide.

And the winner is….

The year 2019 gave the gift of 125 five-star wines to South Africa so I won’t mention them all here, but the three pinnacle achievements went as follows:

Thrust a wine novice into a ballroom full of wine industry bigwigs and the expectation is that you’d need a gas mask just to breathe the air, so thick the atmosphere is with ego, masculinity, and snobbery. Yet, over the course of the two-hour ceremony, as I watched winemaker after winemaker (or estate representative) take to the stage to receive their deserved accolades, I was struck by how normal these people are, and – praise be – how many women were finally being recognised for their talents and abilities as winemakers.

These award-winners are just regular folk doing what they loved but doing it so well that they have been thrust into a limelight of sorts. In fact, they are far more accustomed to the stillness of the vineyards and the gloom of the cellars than they are to celebrity. And while these winemakers shyly accepted their awards, the crowd was unashamedly supportive and rambunctious in their celebrations. There wasn’t a nose to be found thrust in the air. Or at least none that I saw.

Finally, with all award winners announced, the veil was ripped from the countenance of the 2020 edition of the Platter’s Wine Guide, revealing a sexy, deep blue cover (the colour of which changes every year). This year’s colour?

As a South African who has witnessed the incomprehensible grandeur of the night sky from the stillness of the Karoo, I cannot think of a more enchanting name. And as a wordsmith, I have developed a devastating crush on it.

So, what happened afterwards? Basically, the equivalent of unleashing the Cookie Monster on the grocery store cookie aisle. All 125 of the five-star wines were laid out for us to taste, grouped by cultivar or category (white blends, bubblies, red blends, etc.) It was pure, unadulterated wine heaven: tables groaning with the country’s best rated wines with baskets of droëwors and almond nuts to nibble on.

I was like a dog in the woods, a kid in a candy store, and any other adage you can think up. I dived right in with the Pieter Ferreira Blanc de Blancs MCC 2012, Ridgeback Viognier 2018, and Rickety Bridge’s The Pilgrimage Old Vine Semillon 2017, followed by a glorious selection of delectable reds that just about brought tears to my eyes: Mullineux Iron Syrah 2017, Dorrance Syrah Cuvée Ameena, Kanonkop Paul Sauer 2016, Anthonij Rupert Cabernet Franc 2013, Kanonkop Cabernet Sauvignon 2015, Erika Obermeyer Cabernet Sauvignon 2017, and the Crystallum Pinot Noir 2018 by Andrew and Peter-Allan Finlayson.

Within half an hour of – I’m not ashamed to admit – gluttonous levels of wine tasting, the crowds mercifully eased up, leaving me to continue my sipping spree untethered by a concern for civil appearance. I also found a few friends who were as reverentially appreciative of the opportunity to drink five-star wine as I was.

A treat of the highest order

The first time I ever clapped eyes on a Platter Guide, I was a first-year university student working as a waitress and falling deeply in love with the world of wine. I marvelled at this book then, as I do now: it is a formidable tome of South African wine knowledge, a bible for the oenophile, and the best birthday or Christmas gift you could give a wine lover. From reverentially paging through my 2004 platter Guide between serving customers to sipping my way through a heroic sampling of the 125 five-star Platter wines, it feels as thought I’ve come full circle. And it was worth the headache.

Congratulations to all the award-winners, Platter’s Wine Guide, and Diner’s Club International for this year’s tremendous success!

This blog was originally written for Southern Vines, the largest lifestyle and leisure magazine in the Western Cape of South Africa: https://www.southernvines.co.za/2019/11/15/the-40th-edition-of-the-platters-wine-guide-2020-has-arrived/