There isn’t a person on the planet that wouldn’t be able to recognize the iconic sound of the male humpback whale warbling, fluting and booming its sexy message to all the single ladies halfway across the Atlantic Ocean basin.

Whale song is unmistakable. If you haven’t been lucky enough to have heard it for yourself while scuba diving, on board a boat or doing something in the ocean, then you most certainly would have heard it played on those obnoxious commercial CD’s titled “sounds of the ocean”: the ones played on a loop in massage parlours, beauty spas and dentists’ offices. Whale song has also received its fair share of airtime in one of the best creative endeavours to have come out of Pixar Animation Studios: Finding Nemo.

Whale song has piqued the curiosity of humans for decades and for some strange reason, we seem to find it incredibly soothing, if not completely enchanting. Is it because some distant kernel of our consciousness understands or identifies with whale song? After all, whales are mammals and closer in relation to us than most of the creatures we share terra firma with. Or is it because we are simply fascinated with how effectively and beautifully they are able to communicate with each other through a great variety of distinct melodies?

Whatever the reason, we are not the only creatures on the planet to communicate by song, so remember that the next time you think you’re being original by sending your crush a mixed tape.

Why Do Whales Sing? 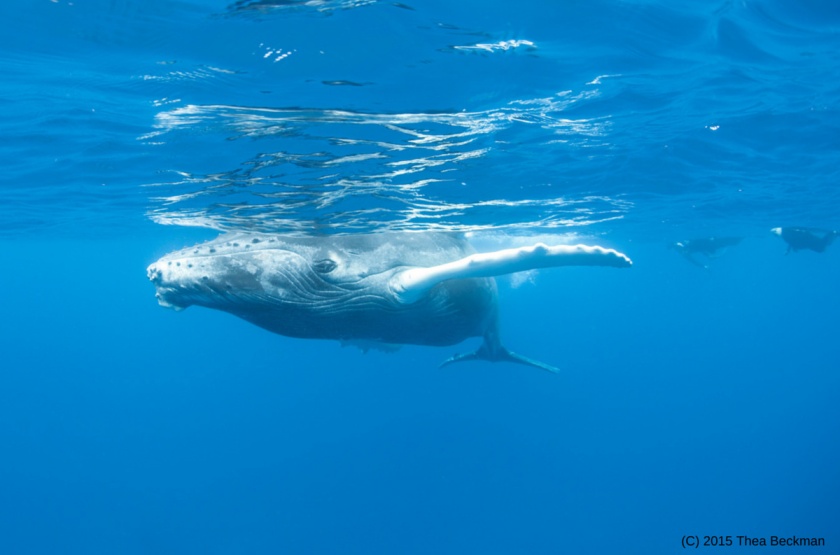 The answer is multi-faceted, the biggest of these facets being communication and for the location of food. The ocean is a dark, murky place and while sharp eyesight may help you to better examine the various bits of krill carapace and ocean algae that float past your grapefruit-sized eyeball, it wouldn’t really serve you beyond idle intrigue. It would be a waste of biological energy for whales to have good eyesight and Mother Nature deplores waste. It’s why subterranean cave-dwelling fish don’t have eyes at all.

The book would be called 50 Shades of Black.

Smell is also not very useful, since molecules diffuse really slowly in water – way more slowly than they do in air. So, even if you could smell underwater, it would take much longer for you to realize that your brother has let rip in the pool, which can only be a good thing I suppose. Sharks, on the other hand, do have a good sense of smell, but this blog is about whales. Too bad.

And so, whales have developed a keen sense of hearing, as well as a fantastic set of pipes with which they pour their cetacean hearts out in an effort to communicate with other whales and to locate ill-fated morsels. Sound travels faster and more efficiently under water, which explains why knocking on the side of the bath with your head submerged under the water sounds like the approaching Tyrannosaurus Rex on Jurassic Park rather than a polite rapping on porcelain.

Whales belong to the order cetaceans, just like elephants are pachyderms, dogs are canines, cows are bovid and humans are idiots. There are two major sub-orders of whales and the two produce different kinds of sounds. They are:

Let’s take a closer look at these two sub-orders and the varying sound tracks they produce.

The Odontoceti or “Toothed” Whales

The odontoceti could be said to be the tone-deaf rappers of the ocean; the terrestrial equivalents of which would be Kanye West or Snoop Dogg and all those other idiots who rely on Autotune to knock out a decent melody. Instead of singing, they make a series of fast clicking sounds and high squeaks, squeals and yelps. Just like your wife does when you try to sneak it in the backdoor.

I did NOT just say that.

The high frequency clicks are used primarily for echolocation. The sound waves produced by a dolphin travel through the water at great speed – approximately four times faster than in air. They then bounce off of objects, such as the ocean floor (boring), physical obstacles (avoid), fish (food) and other dolphins (hey girl) and return to the noise-making dolphin. The keen perceptions of this dolphin will tell it vital bits of information about its quarry, such as where it is, how fast it’s traveling, how big it is and in what direction it’s trying to escape.

Echolocation is a fundamental tool for many creatures, including dolphins and bats, as you will see in the diagram provided above. And it’s exactly the same thing as sonar: you will be familiar with this if you’ve ever seen those action movies set on board a ship or submarine. The scene involves a sweating crew gathered around a console that glows an eerie green colour and makes a “ping-ping” sound that signifies the rapid approaching of some form of impending doom – like a giant sea creature or nuclear missile.

The odontoceti don’t only “sing” for food. They’re also fond of whistling and this is believed to be more for identification and communication with other whales or dolphins. Scrap that. It’s crucial for identification and communication. At the tender age of four or five months old, every odontoceti develops its own unique whistle – it’s very own business card – that will serve to distinguish itself from friends and family in the same pod.

This can become very important in dolphin societies, which are notorious for their sexual exploits. Sometimes, dolphins even mimic each other’s whistles as a way of acknowledging each other, kind of like a signature handshake. How absolutely adorable! 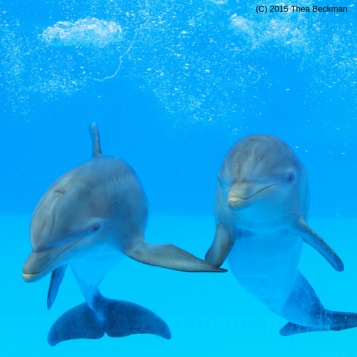 Odontoceti have a structure in their heads that can be said to function very similarly to the human sinus cavity. This structure is known as “phonic lips” and toothed whales and dolphins use it to create sound by passing air through it. Just as the pitch of the sound produced by our larynx is controlled by vibrations (high frequency being high-pitched and low frequency being low-pitched), so too do the odontoceti produce sounds via vibration. These vibrations can also be controlled quite explicitly by the noise-making whale or dolphin, which explains how it is they’re able to produce distinctive patterns. Interestingly, with the exception of Sperm Whales, all odontoceti are able to produce two completely different sounds at the same time and this is because they have two sets of phonic lips.

I’ll leave the lewd joke making up to your filthy imaginations.

The Mysticeti or Baleen Whales

The mysticeti, on the other hand, are the Mariah Carey’s and Celine Dion’s of the aquatic universe and while you may pretend to hate Mariah Carey and Celine Dion in company, we all know: DAMN those girls can SING! Also, “Sweet Lover” is one hell of a tune and “All I Want for Christmas” is the best Christmas song, like, ever.

The mysticeti, known also as the Baleen whales, possess the same biological instruments as us humans do, which may account for their prettier songs than the odontoceti rappers of the ocean. They have a larynx, minus the vocal chords. They also don’t have to breathe out in order to produce sound like we do. Instead, the Baleen whales recycle the same breath of air again and again in order to produce a continuous fluid song.

The interesting thing about all of this is that, beyond what I have explained, we appear to understand very little about how these whales physically produce sound. All we do know is what we have observed and that is that are certain repetitions and patterns present in whale song that makes it diagnostic of certain species and even individuals. You see whale song is used very much like language and like human language and human music, whale song has different dialects, themes, phrases, verses and choruses:

“Like musical notes or words in a human song, whales use about twenty syllables which include cries, chirps and yups, uttered in patterns called ‘motifs’. Two or three motifs make up a phrase, or line, and in turn, several of these make up a theme or verse. The songs are composed of several different themes and while the basic song is continuously repeated, the individual phrases can vary considerably in length, which means that each song can last nearly an hour. It was thought that each population of humpbacks had its own song, which remained constant but recent findings suggest that the whales appreciate a catchy tune and quickly adopt any new songs they hear.

So it would seem that the primary function of whale song in the baleen whales is communication, especially around that special time of year when the males get frisky. Whether this is to woo potential mates or tell rival males to bugger off is the subject of ongoing research. I could tell you right now that it’s probably a combination of the two. Any hot-blooded male will know that where there’s an attractive girl, there are many other dudes you’ll need to dispatch of.

What is really cool about whale song is that all the individuals within a certain area will practically sing the same song. Like teenagers at a Justin Bieber concert, you will be hard pressed to find anyone singing a Tracy Chapman song.

Over time, however, this song slowly evolves to include new themes and these changes are picked up by all the whales in that area almost simultaneously. It’s like one long conversation and everyone is eavesdropping. How rapidly this change occurs is governed by absolutely no discernible constant. Some years, hydrophones record a fair amount of variation in whale song, while other years, one song will remain at the top of the charts for weeks and weeks on end.

Do whales sing for pleasure? While it isn’t really possible to scientifically test this notion, it is a charming thought. And wouldn’t we be arrogant to assume that we’re the only creatures that sing for aesthetic reasons? I’d like to think so. So just as we might enjoy our Top 40 global hits, so too do the Baleen whales and even the odontoceti with their constant rapping, yapping, squeaking and fin-flapping.

To put it eloquently, yet concisely, whale song is “probably the most complex [of all communications] in the animal kingdom,” according to Marine biologist, Philip Clapham.

Even more complex than human communication?

Considering how little we have been able to figure out about whale song, it is entirely possible. And to be honest, I absolutely love the fact that nature finds all sorts of ways to remind human beings that while we are one of the most successful species on the planet, we are not necessarily the smartest, nor are we the coolest.