For sexy servings of moist science in your box, I mean, in your inbox – LIKE the new Why? Because Science Facebook page! Just imagine replacing those vapid status updates and infuriating inspirational quotes with awesome videos of natural disasters, animals being interesting (and occasionally inappropriate) and riveting blogs on the coolest science topics! 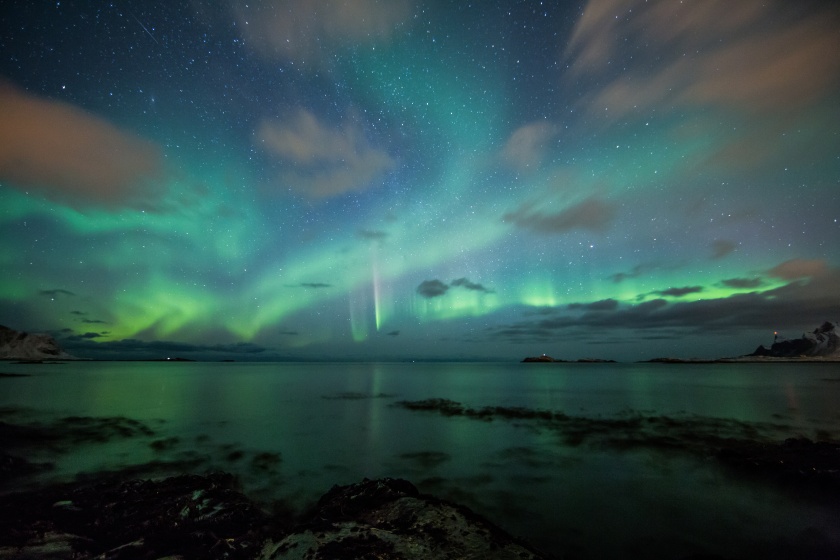 The aurora northern lights in Norway

The aurora looks very much like the gentle rippling of otherworldly greens, pinks, reds and even purples across the deep night sky: like some alien abstract artist swishing radioactive water paint across a black canvas. These colours stream and pulse, shimmer and crackle, swell and fade and ebb and flow. Watching the aurora lights must be the ultimate exercise in escapism. It must be impossible to imagine that you’re still on planet Earth with a view shown in the picture above and below. Not even Arthur C. Clark could paint – with words – a more vivid picture of a totally alien landscape. 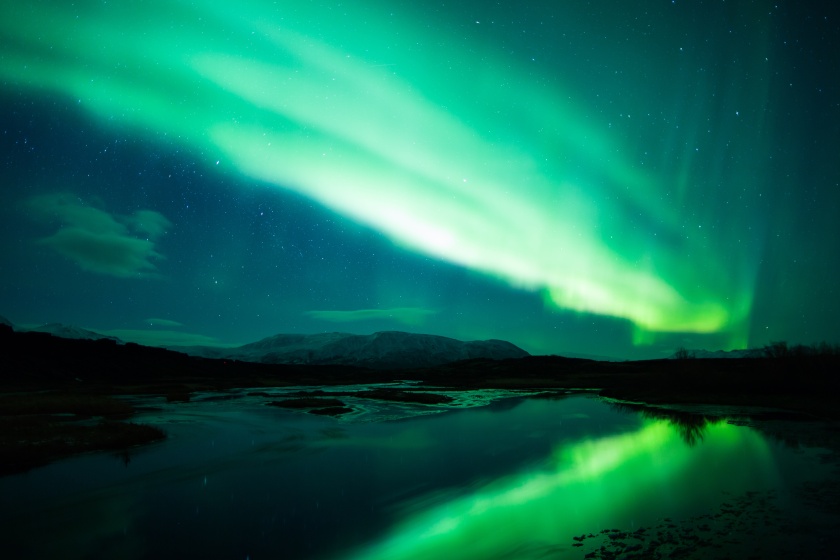 The aurora lights glimmer and stream over a lagoon in Iceland

Is there anything more beautiful, more breath-taking and more enchanting? I wouldn’t know… I’ve never seen the aurora. But if the pictures and YouTube videos are anything to go by, I can’t even begin to imagine what it must be like to stand underneath a canopy of those shimmering ethereal lights. It would probably blow my fragile mind and break my tender heart.

So, What Are The Aurorae?

Contrary to the myths surrounding the aurora, this phenomenon is not your ancestors jiving across the sky, nor is it some kind of luminous bridge into the other world. Our ancient counterparts do, however, earn themselves an ‘A+’ for imagination and also for the foresight to invent the wheel. That has turned out to be kinda useful.

The Aurora is caused by the Sun rudely belching its charged gassy particles all over Earth’s outer atmosphere. This may sound horribly uncouth, but it is a most appropriate metaphor for the physical reality. Let’s take a closer look at the Sun… the long-winded explanation if you will.

Some Alka-Seltzer for the Sun, Please

The Sun is a star. And like all stars, its incredible mass causes unending catastrophic nuclear reactions in its hellish interior. Convection – great currents of outward bound surges of intense heat – transports mass to the surface of the Sun from its molten interior. As you can imagine, the surface of the Sun is anything but Swan Lake. It’s an intense bubbling conflagration of scalding heat.

Great bubbles of burning gas ride these convection currents like the turtles ride the East Australian Current in Finding Nemo and, in a prodigious release of energy, blast out of the Sun’s photosphere. This eruption of energy is known as a solar flare and it is a truly devastating phenomenon that can represent a staggering 17% of the Sun’s entire energy output per second… that’s approximately 600,000,000,000,000,000,000,000,000 joules of energy, give or take a joule.

Diagram: Solar flare activity and its effect on the Earth. The circular lines surrounding the sun-facing side of our planet represent our magnetic field and how it shields us from much of the incoming solar radiation.

Even though our tiny blue planet lies 15 billion kilometres (93 million miles) away, the streams of charged particles emitted by the Sun still reach us and they do so typically within a day or two of a solar flare occurring. This incomprehensible distance represents a leisurely stroll in the park for solar radiation, which doesn’t only consist of the light we perceive as daytime, but rather the entire electromagnetic spectrum, from high energy gamma rays (dangerous) right through to sluggishly slow and lazy radio waves (not dangerous).

These charged particles slap against the outer reaches of our atmosphere, which can damage the little microchips in satellites, disrupt power grids, interfere with radio signals and… *drumroll* cause the sky to incandesce with beautiful otherworldly lights!

A Charged Particle Walks into a Bar…

Charged particles from the Sun smack into the gas molecules that make up our atmosphere, exciting their electrons into higher energy orbits. Don’t worry, I won’t be testing you on this later. When these electrons have had a chance to chill out, they sink back into their normal orbits, releasing the excess energy they had in the form of light.

In plain English: A charged particle from the Sun walks into a bar and straight up to an oxygen atom. It smacks oxygen right in the gob, enraging oxygen which, as a result of its excited state, goes bright green with anger at the impudence of this charged solar particle. If the molecular victim in this analogy was nitrogen, it would have glowed red or blue.

On a vast scale of thousands of square kilometres, the effects of charged solar particles walking into zillions of bars and smacking zillions of oxygen molecules in the faces is staggeringly beautiful. And in spite of the violence of it all, the resultant visual spectacle looks like gentle waves of brilliant light caressing the night sky.

This mechanism may sound horribly confusing, but just because I used “charged” and “particle” in the same sentence doesn’t mean that comprehension is totally beyond you. In fact, we are surrounded by examples of the very same mechanism that cause the aurorae. Neon is a gas and when its atoms are excited, they too incandesce and emit a powerful glow. In the case of neon lights, the source of excitement is electricity.

You may have heard of either, but they are essentially the same thing. Australis means “southern” in Latin – think Australia or Australopithecus, “southern man,” our earliest ancestor who was thusly dubbed because his (or her) crumbly ancient remains were discovered in southern African soil.

Borealis means “northern.” So if you live in or visit the icy clutches of the extreme north, in the countries bordering on the Arctic Ocean, you stand a chance of witnessing the Aurora Borealis, while those in the extreme southern latitudes, the Aurora Australis.

The biggest challenge I’ve faced in writing this has been to choose the correct words to convey the sheer otherworldly beauty of the aurorae. If I haven’t done this phenomenal phenomenon the full justice it deserves, then the following video of the aurora borealis definitely will. Isn’t it the most amazing thing you’ve ever seen? (No offence to the first pair of boobs you ever saw).