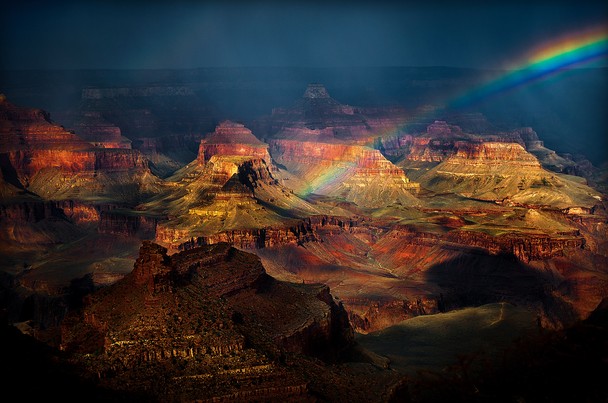 Rainbows have enchanted humankind since our very beginnings, leading to the spinning of countless myths and legends about why and what they are. Just about every ancient civilization, culture and religion has its unique explanation of rainbows; all of them creative, but absolutely NONE of them correct. There is no pot of gold.

Aside from the fact that they look like a hippy has barfed across the sky, rainbows have quite a fascinating backstory involving the physics of light, which really isn’t all that complicated! In this blog, we’ll be taking a look at the physical laws and facts that give rise to some spectacular atmospheric masterpieces and a sky that would put a tie-dye T-shirt convention to shame.

The first ingredient on our palette is solar radiation…

You Need Sunshine, On a Cloudy Day!

Sunshine. It’s a simple concept: light from the sun. But one does not simply have interminable nuclear reactions without generating a spectrum of electromagnetic radiation. Our sun is a star and in keeping with the personality of stars, things are positively nuclear beneath its photosphere. These nuclear fusion reactions release a broad range of radiation types (see diagram below), from low energy, long wavelength infrared radiation (left) to the high energy, short wavelength Gamma radiation (right).

Slap bang in the middle of the electromagnetic spectrum is visible light, which only accounts for a narrow portion of the total energy generated by our sun day-after-day. This visible light pours out into space faster than Kris Jenner can say to Bruce “You’re becoming a what!?” covering the vast distance between the Sun and Earth in just 8 minutes and 20 seconds. It then smacks into our atmosphere and all its constituent gas and water vapor molecules. The photons (particles of light) that manage to escape atmospheric collision end their journey at the Earth’s surface, which is what brings warmth to our lives and color to our environment.

When visible light from the sun strikes a white surface, all of its seven dwarfs, I mean constituent colors get scattered in every direction, which is why we view the object as Snow White, I mean white. If that object is black, however, all of those seven colors become absorbed by the object, which is why you can cook an egg on the dashboard of your black Merc after leaving it in the sun for an hour.

What about colorful objects?

Violet surfaces, like your gay best friend’s curtains, selectively scatter light with a wavelength of around 400 nanometers and absorb the rest. As such, you perceive the color violet (and bad taste) when you look at them.

Blue surfaces, like your lover’s eyes, selectively scatter light with a wavelength of around 450 nanometers. As such, you perceive the color blue and experience inappropriate clenchings in the nethers.

MIRRORS, interestingly enough, reflect all the seven colors of incoming visible light, but instead of scattering them in random directions, they reflect them at precisely the same angle as they arrived at and so the integrity of the image is preserved.

WHAT does this have to do with rainbows?

This discussion is intended to help you understand and appreciate the nature of visible light and the fact that it’s composed of different colors, which are capable of acting independently of each other due to their different wavelengths.

Now it’s when visible light strikes water droplets in our atmosphere that the real magic can begin to happen, potentially making it look like a unicorn wiped its butt on the horizon…

Prism (Not a Katy Perry Album) 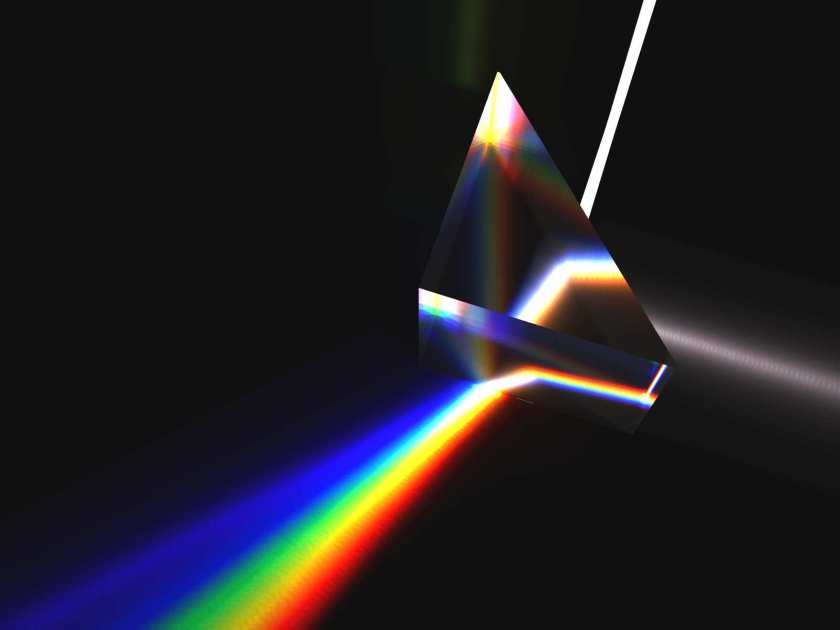 So far, we’ve spoken about light as though it travels in a straight line, which is typically what it does between bouncing off of and being scattered by objects. However, this isn’t the case when it travels through water. When visible light travels from one medium to another – from air into the water – its pathway becomes slightly bent in a process termed “refraction.” This explains why objects under water look so strange: the light that enables us to perceive them is being refracted or bent and this makes your toes (or whatever body part you happen to be scrutinizing) look bigger and closer to you than they really are.

When sunlight passes through a water droplet, it deviates slightly from its incoming direction, because it’s refracted (see diagram below). A portion of this light is then reflected off the far surface of the raindrop. If this angle is at 40° – 42° to the original direction of incoming sunlight, we get a rainbow! 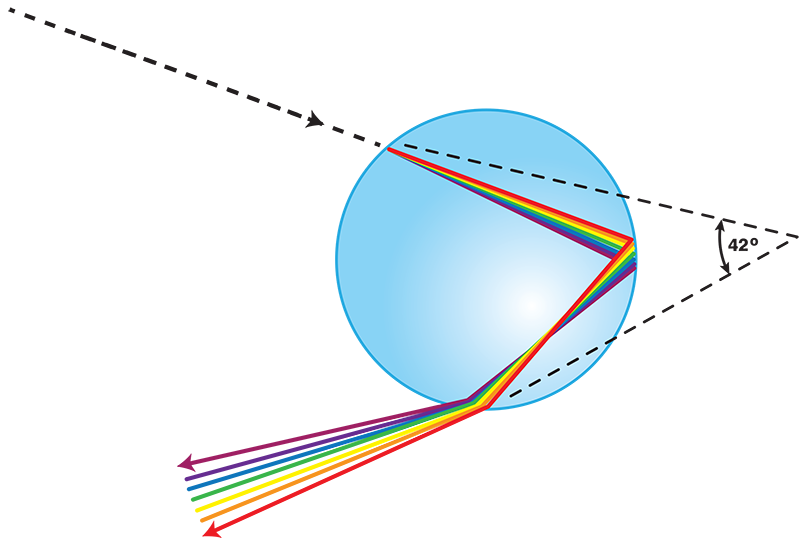 So you see, rain droplets not only refract the sunlight that passes through them, they also act as prisms. The reason this process results in a rainbow is because the seven constituent colors of visible sunlight become refracted to different degrees: the shortest wavelength light (violet) becomes refracted the most and so it’s bent the most. The largest wavelength light (red) becomes refracted the least and so it’s bent the least. As such, when white light passes through a water droplet, it becomes split into its seven different personalities, from violet, blue and green to yellow, orange and red!

This is beautifully captured in the following 40-second video:

Video Source: “Light Split into Colors by a Prism” Uploaded by MadDogScience in YouTube channel http://www.youtube.com/watch?v=hLFcf58qD4w

A Rainbow Is Made!

We can now understand how white visible light, upon passing through water droplets suspended in the atmosphere, is split into its seven constituent colors. The final piece of the puzzle is looking at this process on the large scale. There are billions of water droplets in clouds or mist and each one disperses and refracts the sunlight that hits it. The overall result is a vast display of color in a circular or semicircular arc. Obviously, to us here on Earth, most rainbows would appear to be semi-circular, because the ground gets in the way of us seeing the other half. However, viewed from the air or from the following rare perspective at the top of Zambia’s Victoria Falls, we can see the full glorious monty: 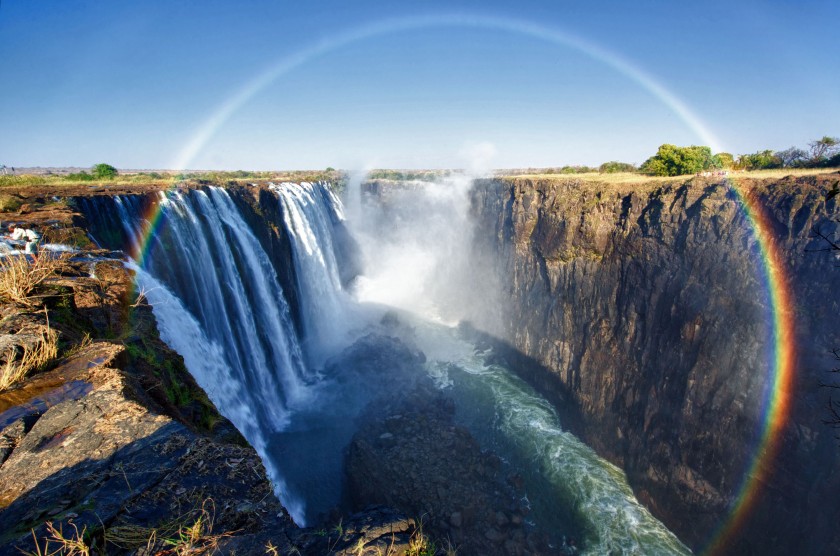 What I haven’t mentioned yet is that perspective plays a major role in our ability to visually enjoy rainbows. The sun has to be behind you and the angle of dispersion – the angle between the incoming sunlight and the direction the refracted light is exiting the raindrop – has to be between 40° and 42°. 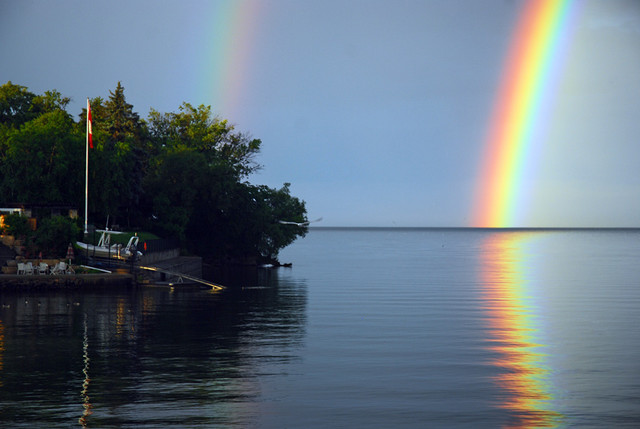 Rainbows have this wonderful effect on people: they make us look. They compel us to forget for just a few seconds everything it is we are thinking/worrying/stressing about and look up to the sky and admire. Really, all a rainbow is is water droplets playing with the paths and emotions of sunlight… but they are beautiful and a reminder that God – or whatever deity is or isn’t up there – is in fact a fan of gay people.