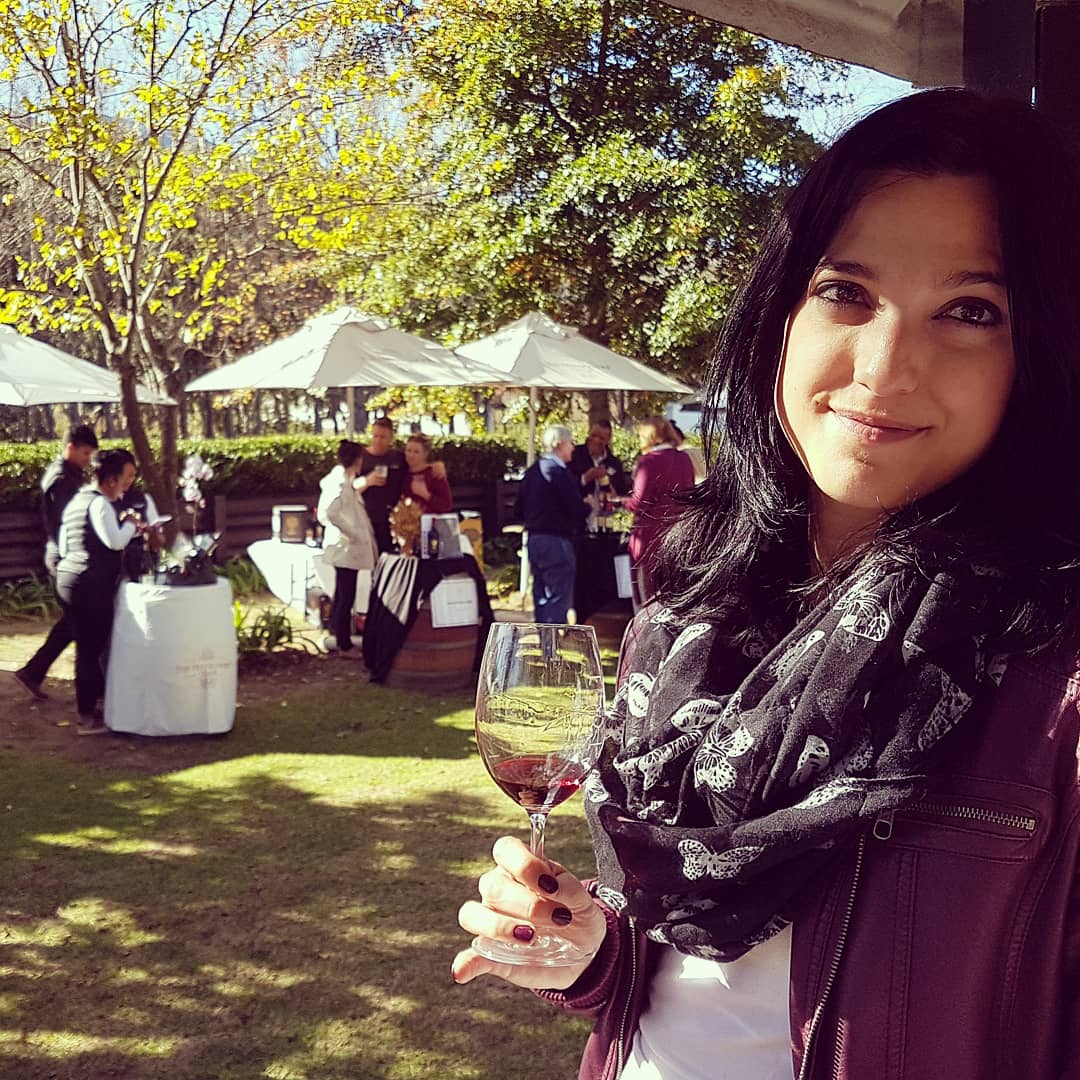 As a lover of red wines – robust, voluptuous red wines – I have been looking forward to the Franschhoek Winter Wines festival since the first press release hit my inbox. This is a festival that celebrates, honours, and showcases those wines that are best suited to a frosty, wintry day in the Cape: in other words, red, red wine (and the odd wooded white).

A clear and cloudless Saturday dawned over the Franschhoek valley on the day of the festival but with morning temperatures in the single digits, the wines would still be showing their mettle against the cold. We were amongst the first to arrive at the Franschhoek Cellar, the venue for this year’s instalment of the festival – and what a fabulous venue it was! 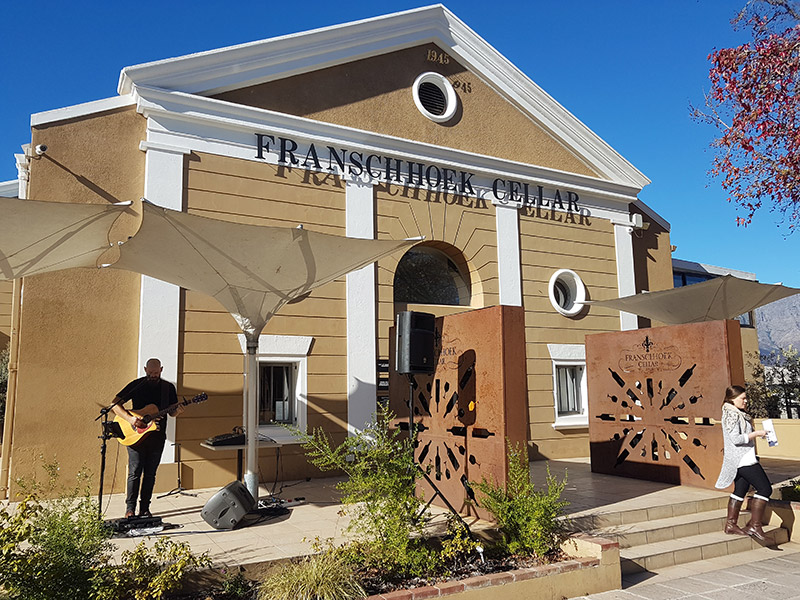 Franschhoek Cellar, “a beautiful asset to the Franschhoek wine route”, can be compared in layout and concept to Paarl’s Spice Route. Its sprawling grounds are home to a collection of gems like a tram-side restaurant, a bistro & beer garden, a wine cellar for tastings and food pairings, and an alfresco eating area complete with central water feature. Visitors here can enjoy the leisurely charms of country life with all the elegance and deep sense of history the Franschhoek valley is known and loved for.

Thanks to the unseasonably sunny day, the festivities were sprawled out in the open with the wine tasting booths scattered across the clipped lawns and beneath the shade of the oak trees. There was also a large separate area furnished with an elaborate jungle gym and guarded by watchful staff, which not only offered parents a respite from being responsible but also saved festivalgoers from tripping over kids. After your 10th wine tasting, you’d be surprised how easy that is to do.

After collecting our tasting glasses and a brief wander, we and sat down to strategize (because when there are 19 wines to taste, a strategy is absolutely necessary if you plan to walk, rather than be carried out of the festival!)

Leg one: dipping our big toes

We decided like good wine nerds to begin with the lighter-style reds and the one white wine present and so, armed with our branded wine glasses, we commenced on the first leg of our grand tour of the Franschhoek wine valley. We tasted:

With four tastings done and dusted, we paused for a tender barbequed chicken kebab and a pull of water – all a part of the strategy, you see. We then resumed our assault upon Franschhoek’s winter wines with a tasting of:

By this stage of the day – sun merrily beaming down upon the festivities, crowds thickening, teeth purpling – the effects of all the quality red wine were beginning to show themselves. And so we ordered a truffle mushroom pizza and sat down to eat in the tram-side restaurant located adjacent to the gardens, with spectacular views over autumnal-coloured vineyards to the blue, hazy mountains beyond. By the way, when (not if) you visit the Franschhoek Cellar, you owe it to all that is good in the world to try the truffle mushroom pizza. It will ruin you for all future pizzas: it is that good.

Leg three: all in

Stomachs lined with heavenly cheesy, truffle oil-doused pizza and a bottle of water for hydration, we headed back out for the final onslaught and to tackle what we reckoned to be the heaviest reds the festival had to offer.

Truth be told, we tasted other wines…but by the time we got to them, the palates had been dulled and the focus shifted to enjoying the company of the fabulous and interesting people present. So, I would like to fondly acknowledge the Boschendal Wines Nicolas 2016, Anthonij Rupert Optima 2014, Bellingham Pinotage, and Leopard’s Leap Cabernet Sauvignon 2017 for the role they played in my (deserved) headache the morning after.

Why I’ll go back…again and again

While I can appreciate wines of all complexity, colour, and body, the Franschhoek Winter Wines festival is dedicated to the wines I love the most: red wine. Does it get any better than being able to meander from one wine tasting station to the other, sipping on beautiful winter wines, speaking to winemakers and ambassadors whose passion and knowledge are offered in equal measure, and all in one of the most magical places on Earth, the Franschhoek winelands? It does but only for one reason:

Nobody cares that your teeth are purple. 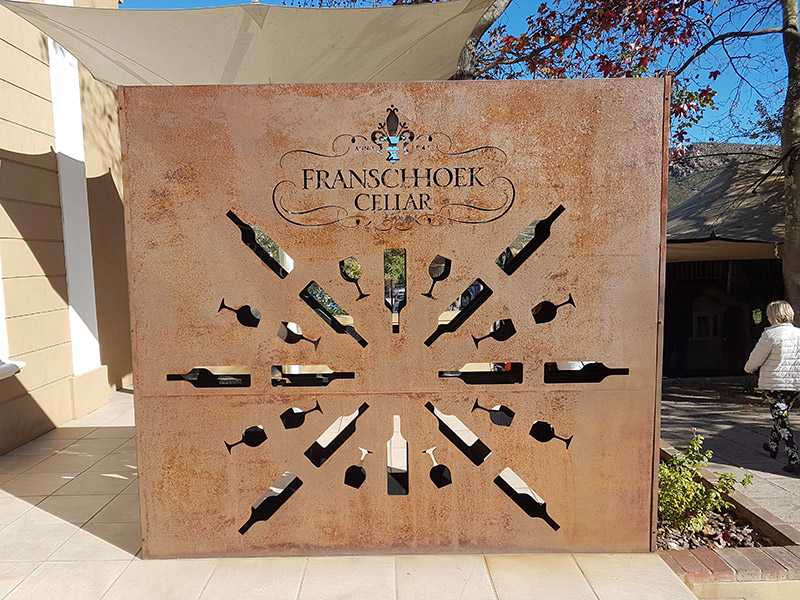 This blog article was originally written for Southern Vines magazine, the largest lifestyle and leisure magazine in the Western Cape of South Africa: https://www.southernvines.co.za/2019/06/18/franschhoek-winter-wines/