Step aside Big Five, whales are so much bigger and you don’t need to schlep to the Kruger National Park to see them! Every year, around June and July, great pods of southern right whales make their way northwards from their feeding grounds in Antarctica’s frigid Southern Ocean. The purpose of this epic journey is to reach the substantially warmer waters around South Africa, where they will make sweet love, have babies, and show off their fins. And it’s the predictable arrival of the whales each year that attracts hoards of people, both tourists and South Africans, to the Cape.

At this time of year, southern right whales can be seen cavorting along the south-western Cape coastline from several land-based vantage points. The most notable (and successful) of these vantage points are found in False Bay, Cape Agulhas, and, of course, the famous whale-watching town of Hermanus, which the World Wildlife Fund has rated as one of the top 12 whale-watching locations in the world.

Truth be told, however, you don’t have to drive far at all to see these marine mammals that are, in spite of being the size of a bus, remarkably graceful. In peak calving season, they take refuge in the shelter provided by the natural harbours of our scalloped coastline, and it’s here that you’re likely to see them whilst sipping on a cocktail at the Chapman’s Peak Hotel in Hout Bay, or on a sunset beach walk in Camps Bay. In fact, wherever you are along the Cape peninsula between June and November , you shouldn’t be terribly surprised to see a tell-tale spout of water, a skyward-thrust flipper, or a tempestuous fluke (tail) spanking the surface of the water.

The Cape’s Species of Visiting Whales

Southern right whales – so called because their tendency to move slowly made them the “right” targets for whaling vessels – aren’t the only species to grace the Cape. We are also routinely visited by humpback and Bryde’s whales, as well as several species of dolphins, which, if you ask any zoologist, are also technically whales. In November of 2016, a pod of an estimated 60 humpback whales made the waters off Cape Town their feeding ground and for several days, they just about broke the internet with people sharing photos and videos of their unusually vivacious antics.

We are also, on the rare occasion, visited by orcas or killer whales. In May 2017, the butchered bodies of three great white sharks were recovered at Gansbaai, a small seaside town about 160 km up the east coast from Cape Town and a stone’s throw from Hermanus. All three of the carcasses had been savaged and their livers completely torn out by what was clearly a much larger predator. So, unless Godzilla had once again risen from its deep-sea abyssal lair, the perpetrator/s could only have been visiting orcas, which not only have a liking for shark meat but are also known to be quite fond of liver! Yum.

South Africa’s coastal waters are teeming with marine life: great kelp forests gently swish and sway in the swell, Cape fur seals honk and bark at each other from their sunbathing spots on harbour walls, and beach rock pools are a kaleidoscopic array of purple sea urchins, orange star fish, and red sea anemones. A little further out to sea, we have some seriously big predators patrolling the waters, and, in the air above, a diverse bird life made up of gannets, cormorants, gulls, petrels, shearwaters, terns, and albatrosses.

The Cape is blessed with a biologically rich marine biome but its pièce de résistance has got to be the stately whales that, every year, make their homes and their babies in our bays. So, find yourself a great spot, take a picnic, crack open a bottle of vino, and enjoy the show!

Whale watching spots in and around Cape Town:

This article was originally written by Thea Beckman for Southern Vines Magazine: http://www.southernvines.co.za/2017/08/04/whale-watching-cape-town-capes-celebrated-cetaceans-returned/

Read Part 1. I mean, who reads Part 2 before reading Part 1? Are you dyslexic? Are you an anarchist trying to upset world order? Or are you another hipster on yet another fruitless quest for originality?

Here are the next 5 super strange critters on my list!

Contrary to appearances, this is not some outlandish proctology case study. It’s a very special kind of deep-sea worm that belongs in the cool-sounding category of the “extremophiles,” which are organisms that thrive in extreme environments. The neighborhoods of choice for Pompeii worms are hydrothermal vents and volcanic fissures, especially around the active plate boundaries in the Pacific Ocean. Also known as bristle worms, these rather hideous deep-sea squishies are a very recent addition to our taxonomic system, having only been discovered off the coast of the Galápagos Islands in the 1980’s.

It’s On This List Because: Pompeii worms live in water that is close to boiling point! They’re also covered in hairs that aren’t hairs at all: they’re stringy colonies of bacteria that are thought to help them withstand the perpetual heat they live in. To repay them, the worms secrete a delicious gooey snot that the bacteria feed on. Bloody charming. 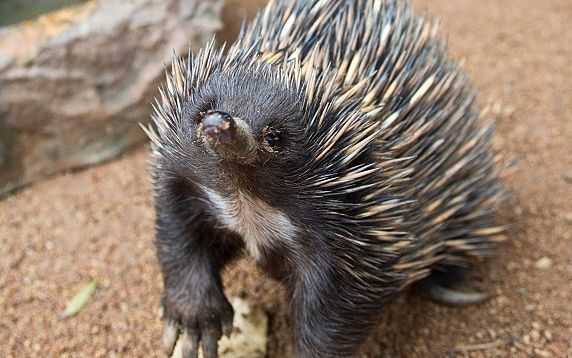 The echidna is just one of Australia’s many and very unique offerings to the animal kingdom. They look very much like hedgehogs, with a bristling back of spines that would deter even the hungriest, most desperate and stupid of predators. Like the duckbilled platypus, the echidna is a monotreme; the order of mammals that lays eggs. Yes. A mammal that lays eggs.

If you want to impress an echidna, lay out a picnic spread of termites and ants and they’ll hoover up the lot. There are three different species of echidna in Australia and one of them is named after my third favorite old man, Sir David Attenborough. My dad comes first and Santa Claus a close second.

It’s On This List Because: It’s a mammal that lays eggs. I mean, could you imagine walking in on your cat sitting on a clutch of eggs? So weird!

In Egyptian mythology, the Sphynx was a great and terrible beast that had the head of a man and the body of a lion. In fact, the Sphynx was such a douchebag, it would get a kick out of posing travellers impossible riddles that – if they got wrong, which they invariable would – would land them up as lunch. Today, however, the Sphynx has been very much downgraded from merciless flesh-eating beast to a bald, comical looking cat. Whether it’s divine justice or coincidence that these two share the same name is yet to be proven by science.

Around the 1960’s some idiot got it into his or her head that it would be fun to own a hairless cat and rather than simply shave a regular domestic cat, they began a selective breeding program that has resulted in the breed known as the Sphynx. They’re strange-looking beasts, with velvety downy skin, huge sardonic eyes and prominent cheekbones; an aesthetic they share with most runway models.

Closest Relatives: The Egyptian Sphynx (yet to be proven by science)

Physical Address: Yours possibly… if you like your cats hairless.

It’s On This List Because: It’s a bald cat that doesn’t seem to know it, or care.

Okay, so I KNOW you’ve never heard of this one before! In fact, I had to slowly pronounce the name of this critter about 7 times before I could say it out loud properly. The Hispaniolan solenodon is not a Latin dinosaur*. Rather, it’s a long-snouted nocturnal mammal that – get this – is venomous! The Hispaniolan solenodon gets its very name from the unique structure of its teeth (dont meaning tooth in Latin), which are capable of delivering a shot of venom into its prey or enemies. This special critter is found exclusively on the island of Hispaniola, hence its name, although there is another specie of solenodon on Cuba.

Physical Address: Of the two surviving species of solenodons, the Hispaniolan solenodon can be found hanging out on the island of Hispaniola (shared by the Dominican Republic and Haiti) and the other smoking cigars in Cuba.

It’s On This List Because: It’s a rodent-like critter that’s venomous! Also, solenodons closely resemble the primitive mammals that were alive towards the end of the reign of the dinosaurs. 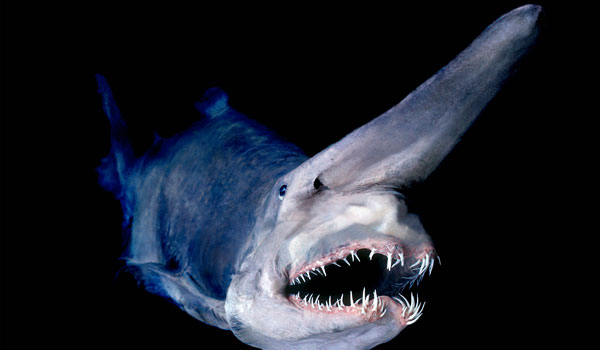 The goblin shark is one of those creatures whose name pretty much nails their appearance. It’s probably a good thing these animals dwell at ocean depths where no sunlight filters through, because if girl goblin sharks saw just how ugly boy goblin sharks are, the species would likely go into extinction. In fact, the first person who accidentally discovered this species reportedly thought it was a regular shark that had been accidentally or genetically disfigured.

Goblin sharks usually grow to between 3 to 4 meters in length and use their very large and sensitive schnozz to sense out the weak electrical impulses generated by other deep-sea animals. They typically hang out below 100m depth and the only reason we know they exist is because the odd one gets dredged up by deep-sea fishing trawlers.

Physical Address: Goblin sharks adore the inky darkness of the deep ocean, so you’ll find them around submarine canyons and upper continental slopes.

It’s On This List Because: It could literally eat an apple through a tennis racket with those teeth and its nose would make a Jewish banker jealous.

That concludes my list! So, apart from your husband, what do you find to be the strangest animal and why?